So I finally got around to going to Lake Rotoroa, or Hamilton Lake. It’s inexcusable. I’ve lived in Hamilton since January! (Well, okay, I did visit the lake once, but that was before I lived here and before the awesome playground was built. Anyway.)

The Hamilton Lake Domain is a five or ten-minute walk from the Hamilton city centre. The lake isn’t massive, but it still takes nearly an hour to walk around. It’s not staggeringly pretty or anything, but it’s great to have such a nice walk in the middle of a city. The paths are well-maintained and there are plenty of places to sit down as you go.

There’s a lot of birdlife around the lake. I’ve never seen so many pukekos at once! They were really friendly too. People obviously feed them, because one came practically running up to me as soon as I arrived. There were quite a few coots as well, along with the expected pigeons and ducks.

I didn’t go to the lakeside café, but it looked decent. It was in an interesting building, at least. Tucked away behind it, rather surprisingly, was an old train. I didn’t spot any signs explaining its presence, but then again I wasn’t particularly looking.

The best thing about the Hamilton Lake Domain is it’s got a very impressive playground. I would have loved it as a kid. It was only built this year and it’s absolutely fantastic. It’s huge, overlooking the lake, and it’s got a few fascinating water-sculpture-type-things. I recognised one as an Archimedes screw. 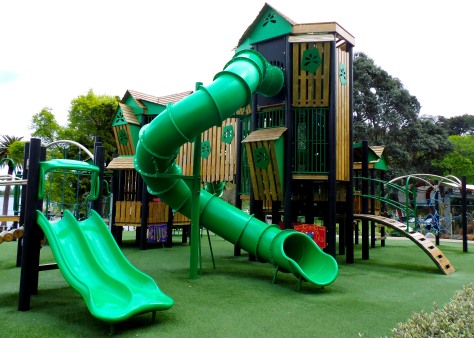 There’s also a rose garden, which, unfortunately, looks a bit lame at the moment. Wrong time of year, I suppose. I quite liked the sculpture next to it, though.

I don’t know how anyone can say Hamilton is an awful place to live when it’s got places like this. Even the nearby water tower is the prettiest water tower I’ve ever encountered, adorned with columns to give it the suggestion of classical architecture. (Well, okay, it’s not pretty, but at least it’s ugly in an interesting way. Anyway.) 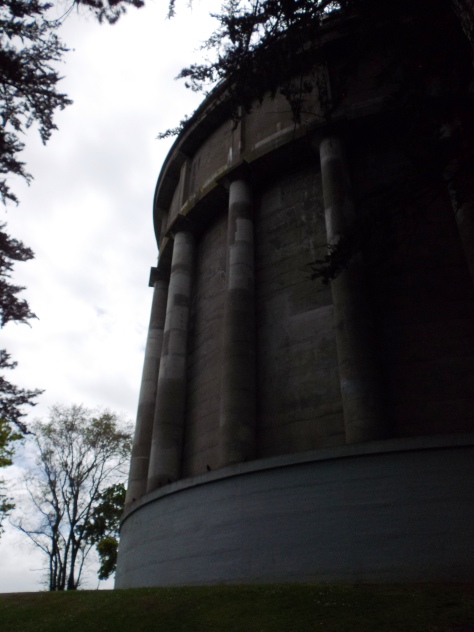 For more about life in the New Zealand city of Hamilton, see:

The Best Place to Go in Hamilton

3 thoughts on “A Walk around Hamilton Lake”