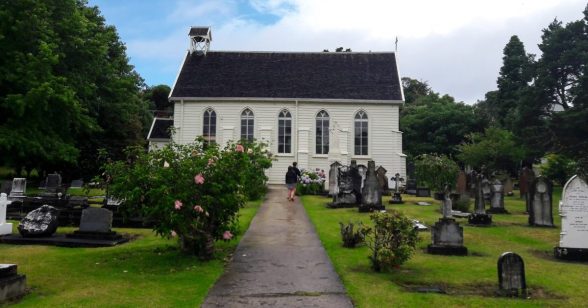 I’d wanted to visit Russell ever since I’d read it was once known as ‘the hellhole of the Pacific’. New Zealand’s first European settlement, the port seethed with boozing, gambling and native girls offering their services in exchange for nails, muskets and syphilis. Traders and whalers mingled with Māori tribesmen and missionaries. Sails creaked. Barrels rolled up and down gangplanks.

Today, Russell is a bit different. It’s a charming, little tourist town in the Bay of Islands, which you can reach by ferry. (There’s a passenger ferry from Paihia, or a vehicle ferry from Ōpua. There’s also a road that wends its way around from Kawakawa, but having driven it with my partner, I don’t recommend it. Just get the ferry.)

Aside from water-based activities such as swimming with dolphins, Russell’s three main attractions are the museum, the old church and the Victorian printery. Personally, I’d say the number one thing you can do in Russell is have an evening meal on the Strand, overlooking the sea. The Strand is an idyllic street of old, wooden buildings containing a row of very nice restaurants, with an abundance of beachside seating. But more on that later.

When my partner Tim and I arrived in Russell, it was absolutely chucking it down with rain, so we sought refuge in the museum. It was actually quite disappointing for the price. There were only two rooms, but I’ve visited some excellent small-town museums and this… wasn’t one. (If you want to visit an excellent small-town museum in Northland, go to Waipu.) I’d still recommend checking it out if you know nothing about Russell’s history, but if you don’t have much time in Russell, definitely visit the Victorian printery instead, otherwise known as the Pompallier Mission House.

Both my partner and I really enjoyed our tour of the printery. By this time, the rain had stopped and the sun was blazing. (New Zealand summer!) Consequently, the gardens around the house – and the fishing-boat-bobbing sea beyond – looked glorious. There was a tannery behind the house; the gift shop sold leather-bound notebooks made on the premises. Next to the house was a lovely-seeming café, but unfortunately, we were too late to patronise it, having caught the last tour of the day.

As for Russell’s old church, Christ Church, it won’t take you long to look around. Do, though. It’s rather pretty and if you look closely, you can find a few musket ball holes in its side. The graves are quite interesting as well. We saw one that had what looked like a chessboard on top of it, and we both though it might be nice to be buried with a chessboard on top of us, so our descendants can come and play chess on our graves. Then Tim thought why stop at chess? You could have a hexagonal layout for playing Settlers of Catan, or a world map for playing Risk… But anyway.

We’d made a booking for dinner at New Zealand’s oldest restaurant, The Gables, on the Strand. It was built in 1847. We had a window table, which opened right out onto the beachfront. The water reflected the golden light of the evening as we dined. And the food was wonderful, of course. 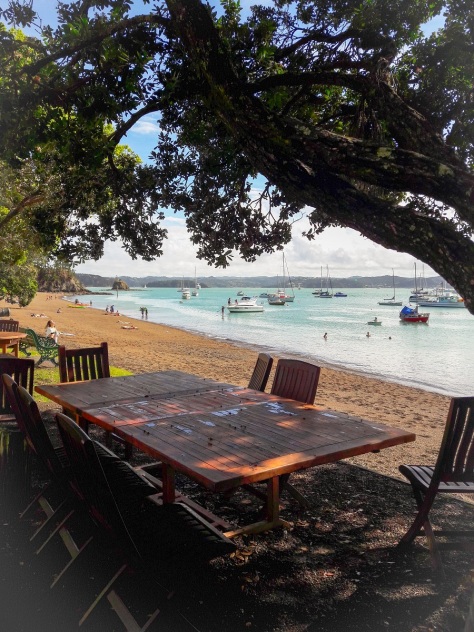 The ferries to get you out of Russell keep going until quite late. They’re also really cheap, which was good for us after we’d splashed out at the restaurant. We drove away from Russell feeling all warm and fuzzy. We’d just had a marvellous day.